My cellar is getting a little low on homebrew supplies, and a long weekend is a great excuse to kick off another homebrew. I currently have some good winter beers - an English Bitter and a ‘Who’s your Taddy’ Porter. I’d like a standard and flavourful Pale Ale on the shelf - so thought I’d revisit the Tiny Bottom Pale Ale recipe from Brülosophy. This beer I’d last made a few months ago had ‘won’ at the recent homebrew weekend up at Tate lodge in Guthega - so time to get creative and play wth a few subtle variations, some through finishing odd bits of grain and hops I had lying around.

As per usual I filled my 50 litre stockpot with around 34 litres of water - and heated up to my strike temperature of around 74 degrees. I brew usng a brew in a bag (BIAB) single infusion, single pot method - so it’s a relatively quick and easy process. It needed to be as I was still painting the house, and wanted to go for a 20km run before dark. Better get cracking!

After quckly grinding up the uncracked Vienna malt in my mill (see below) I could mash in. 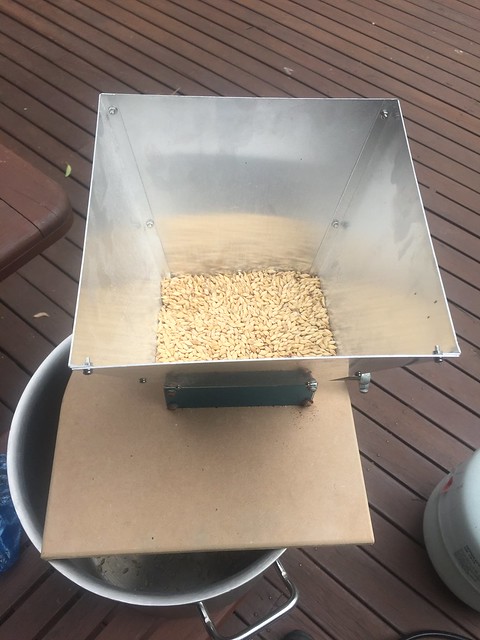 After 45 minutes, as the mash temperature had dropped to about 68 I turned the burner on to a low heat to raise the temperature by a degree or to. At the 60 minute mark - I pulled the bag out and strained my upper body to hold it out of the wort for a few minutes to drain. The grains then resting on my old DIY sparging bucket. 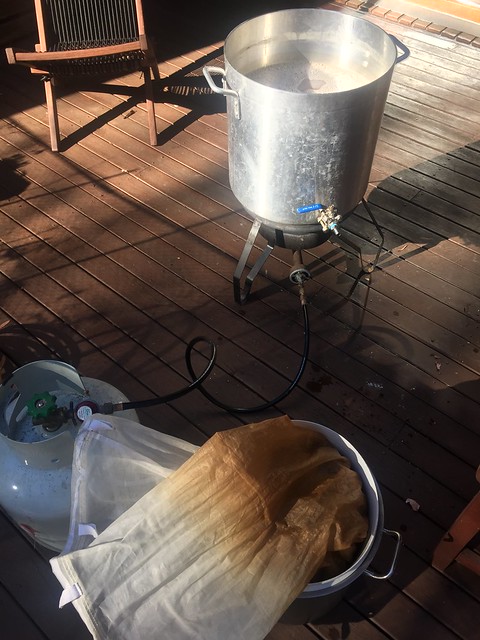 Time to boil, with the burner dialled up to full. The hot break came in about 20 minutes. This time the foam almost rolled over the pot - never had a hot break go that high before. The hop additions came as noted below - and I’ll dry hop with some spare Citra I ought to use up - and perhaps a bit of Simcoe or Chinook too. 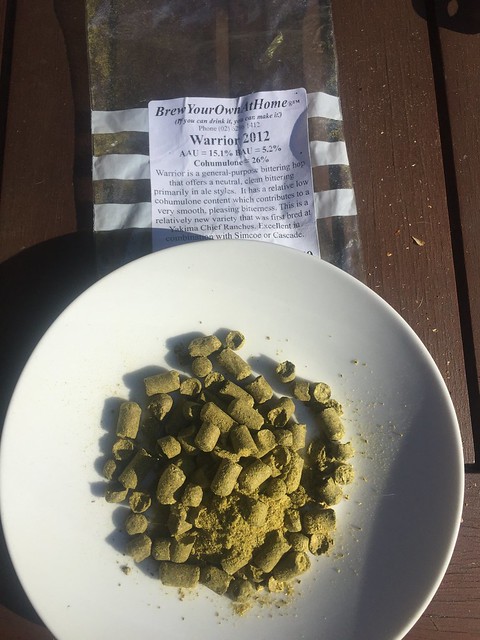 After the final hop addition - I plumbed in my DIY wort chiller and got the cold water flowing through t. I started rehydrating my Safale S-05 dry yeast, cleaning up and ferry the water that keeps flowng out of my wort chiller across the garden. Taking a couple of readings with my refractometer - looks like I hit an Original Gravity of 1049. Target acquired!

I fired up my fermentation chamber fridge, and connected Brewpi. It’s been super reliable - but for some reason the brewPi was complaining about it’s touchscreen needing to be recalibrated. Fortunately a few restarts, and restarting the script it runs via the web admin interface got it back. I pulled up my Safale-S05 brew profile. It’s designed to hold a steady 18 degrees for 5 days, then raises to 19 degrees for a further 3 days - before cold crashing down to 5 degrees for a couple of days.. The cold crash drops a lot of proteins/sediment out of the beer - helping me to get pretty bright beers out of the bottle.

I opened the tap and filled my fermentation tub - about 21L, at about 26 degrees. Pitched my hydrated yeast, and manhandled the 21kg up into the study and into my fermentation chamber. 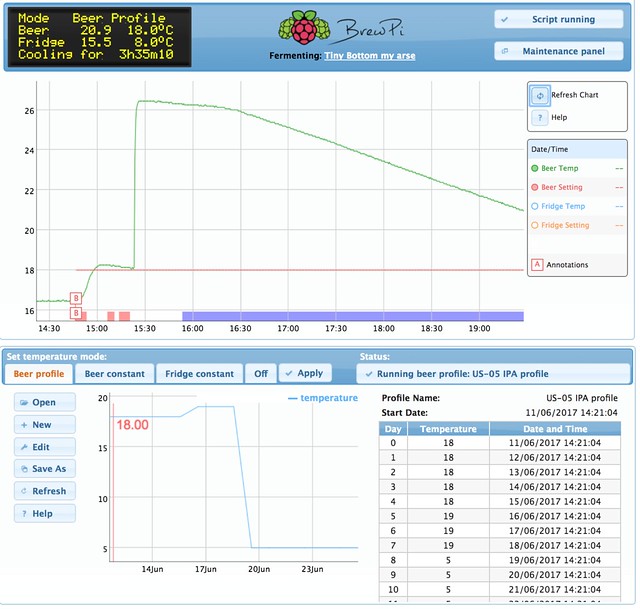 Stay tuned - as I’ll report on the outcome after about a month.